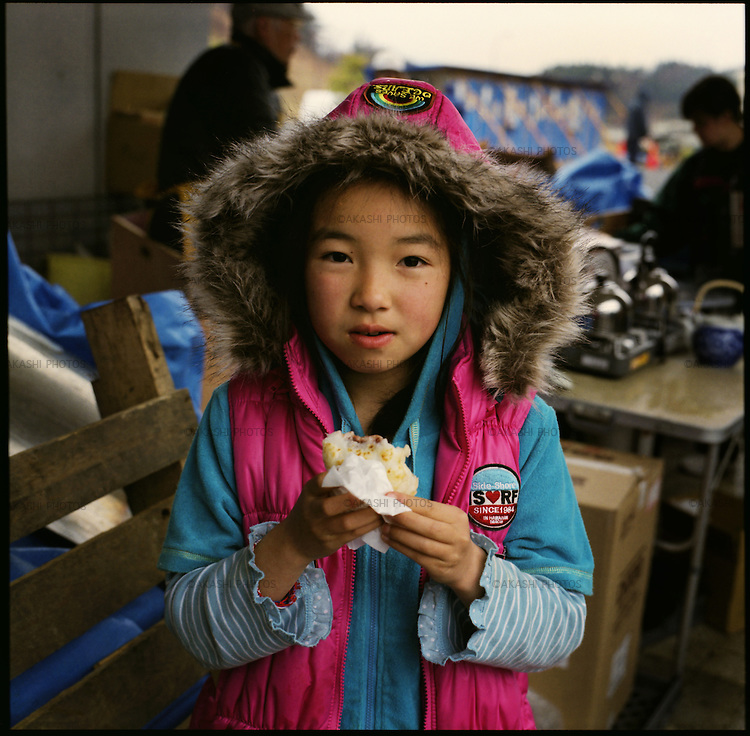 Mika Suzuki, 10, eats Japanese sweets made by volunteers in a shelter in Minamisanriku, Miyagi, in one month after the earthquake and tsunami. The coast side of Minamisanriku was protected by the eight-meter-high water gate after the tsunami of 5 meters height in 1960 that killed 41 people. On March 11, 2011, the wave height of 15 meters (49 feet) went over the water gate and swallowed the whole town. The tsunami destroyed 70% of the 5600 houses in the town. Her house was also washed away. When the tsunami swallowed her town, she was in the school on the hill. The teachers called all students and counted the number of the students. The teachers decided not to move from the hill and stay over a night. Mika stayed up all night with other students and teachers. "We had only three candles to spend a night," she said. "It was so cold and scary." The following day, his father walked through a mountain and reached the school to find Mika. "I was so relived that my father showed up," Mika said. They walked back together through a mountain and reunited with other members of family.
On March 11, 2011, the earthquake of magnitude 9.0, the biggest earthquake in the history of Japan and the fourth biggest earthquake in the world after year 1900, shocked the Tohoku area of Japan. In about 30 minutes, devastating tsunami reached, affecting the coastline with a length of 500 km (310 miles). The tsunami wave height of 39 meters (128 feet) was recorded in a port town in Tohoku. The tsunami swallowed villages along the coast and washed away all houses. The earthquake and tsunami killed more than 15,800 people, and still more than 3,500 people are missing.
Toru Morimoto