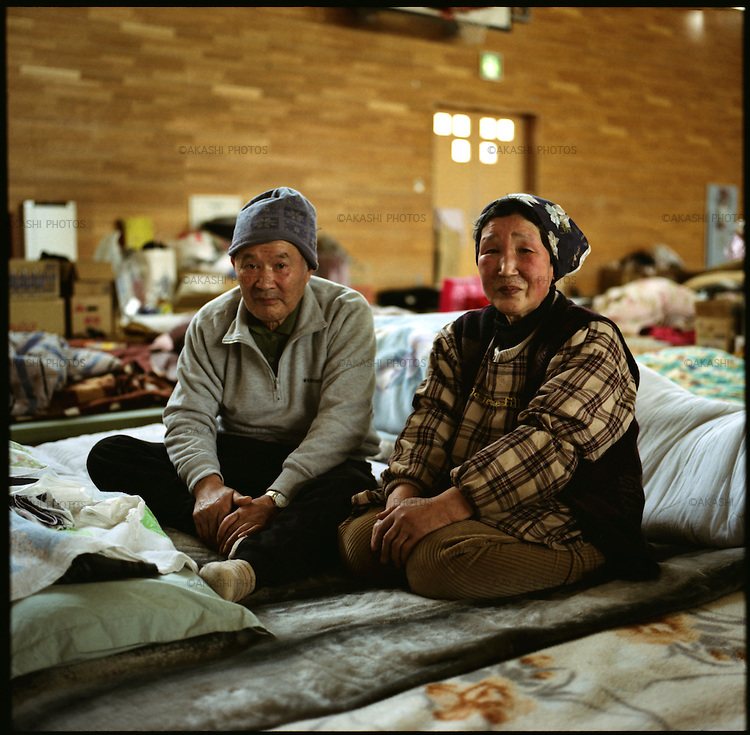 On March 11, 2011, the earthquake of magnitude 9.0, the biggest earthquake in the history of Japan and the fourth biggest earthquake in the world after year 1900, shocked the Tohoku area of Japan. In about 30 minutes, devastating tsunami reached, affecting the coastline with a length of 500 km (310 miles). The tsunami wave height of 39 meters (128 feet) was recorded in a port town in Tohoku. The tsunami swallowed villages along the coast and washed away all houses. The earthquake and tsunami killed more than 15,800 people, and still more than 3,500 people are missing.

Mrs. Tsugi Hashimoto, 66, and Mr. Kyuji Hashimoto, 71, in a shelter in Kamaishi, Kamaishi High School's gymnasium, in one month after the earthquake and tsunami. The night before the earthquake, Mr. Hashimoto told her wife Tsugi that the sky was so strange that something might happen. Clouds were swirling and the sky was darker than ever. And the same night, he had a nightmare in which their house was burned down. The next day, earthquake and tsunami hit their village. They grasped their bag in which they always kept important things for emergency. They climbed the hill behind their house and took a refugee in a barn where they found other seven displaced people. At night, the temperature went down, and it started to snow. Another man arrived at the barn at around midnight. He was soaked and injured by the tsunami. They tried to warm him up. Shivering in the blanket, the injured man asked, "Am I dying her?" They tried to cheer him up, but he passed away before dawn. The barn was surrounded by the fire. They were completely isolated. Two days later, they were found and rescued by a helicopter. "We never thought this kind of huge earthquake hit us," said Mrs. Hashimoto. "But, my husband's nightmare was true."
Toru Morimoto